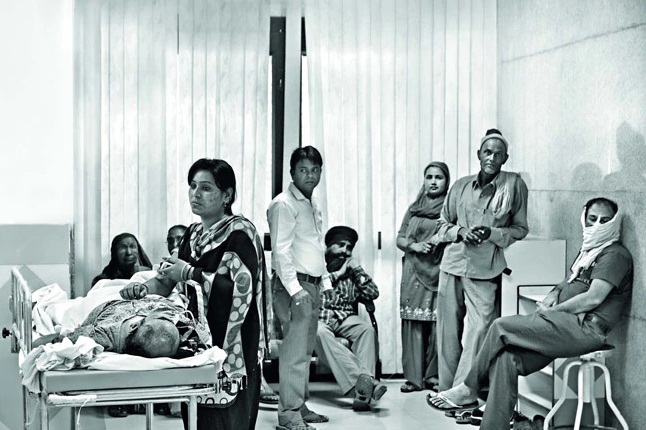 The Center for Disease Control summarizes the situation this way: “Unique circumstances of culture, location, history, and health care produce unique patterns of cancer occurrence among American Indians and Alaska Natives (AI/AN) in the United States. Many AI/AN live on reservation lands or in remote rural areas, and their primary health care is provided by a tribally operated health program or the Indian Health Service. Rural and urban AI/AN alike experience greater poverty, lower levels of education, and poorer housing conditions than does the general U.S. population.”

In looking at the overall cancer rates among Indians, we should keep in mind a couple of things. First, the reported cancer rates may not be accurate. The Fred Hutchinson Cancer Research Center notes: “these numbers may be underreported because of past flaws in collecting this information.”

A report from the Yakama Nation: “Information on the exact magnitude of the cancer burden among Native Americans is both incomplete and compromised by significant levels of racial misclassification, underreporting of cancer cases, the reluctance of many Native Americans to provide personal information to researchers or cancer surveillance personnel, and insufficient and underutilized databases, among other problems.”

The rural nature of reservations coupled with the poor, and often culturally insensitive, healthcare facilities mean that cancer screening is less frequently done. It also means that cancer is often not detected at the early, treatable stage, and therefore the survival rate is lower.

For example, Indians over age 50 are less likely than other Americans to have received a colon cancer screening test —such as a fecal occult blood test, colonoscopy or sigmoidoscopy—within the past two years. According to the Indian Health Service, this is due in part because of the lack of resources to perform the routine tests that detect the early warning signs of the disease. Colorectal cancer is highly treatable if caught early enough, but for American Indians it is usually not detected early.

American Indian and Alaska Native women are three times more likely to die of cervical cancer than all other American groups. Once again, this is a cancer that can be treated if found early enough.

American Indians and Alaska Natives are about twice as likely as other groups to have liver cancer and to die from it. There is a correlation between liver cancer and heavy alcohol use, obesity, and diabetes—all conditions which are widespread on the reservations. A number of Indian nations have implemented culturally appropriate programs to deal with alcohol abuse, obesity, and diabetes. The scientific studies have shown that the chances of getting liver cancer are reduced by not smoking, keeping a healthy weight, eating fruits, vegetables and whole grains, exercising regularly, and limiting alcohol consumption. For poor people, a healthy diet is often too expensive.

It has been well-documented that there is a correlation between lung cancer and smoking. While smoking has declined in the United States over the past two decades, American Indians and Alaska Natives are more likely to smoke. At the present time, the smoking rate is estimated at about 31% as compared with about 18% for the general population. Smoking rates tend to be highest in the Northern Plains and in Alaska. Many Indian nations have programs intended to reduce recreational use of tobacco, keeping in mind that tobacco has a long history of spiritual use among Indian people.

In 2002, the President’s Cancer Panel was invited to visit the Yakama Nation in Washington. They reported: “Moving and troubling testimony was received from nearly 40 cancer survivors, family caregivers, physicians and other medical personnel, outreach workers, health care administrators, and cancer researchers. They described in detail an Indian health system hobbled by longstanding, severe underfunding, inadequate infrastructure and staffing, and the maze of complex and arcane requirements of the Indian Health Service (IHS) system. These problems frequently cause needed cancer care to be delayed for months at the patient’s peril—and even denied.”

Solutions to healthcare concerns among American Indians have been suggested since the 1928 Meriam report. Over and over again, it is apparent that part of the solution is inadequate funding. The federal government spends more for prison healthcare than for American Indians. Virtually every report on reservation health conditions calls for more funding and in response Congress tends to cut this funding in the name of austerity.

The second barrier to adequate healthcare on the reservations is cultural insensitivity. The 2002 report from the Yakama Nation:  “Some Native people also hesitate to engage the health care system, particularly providers outside the IHS system, due to cultural and language barriers. Even within the IHS system, many of the available physicians are foreign nationals who are temporary and are unfamiliar with Native American cultures and beliefs. Building a relationship of trust and mutual respect with the health provider is often extremely difficult under these circumstances. In addition, many non-Indian providers are unwilling to include traditional health practices or Native ceremonies in hospitals or in the course of other cancer care even when it is possible to do so without jeopardy to the patient’s treatment.”

Finally, dealing with cancer is a public health issue and this means involving the public. On the reservations this means tailoring the public health message in culturally appropriate ways. The kinds of public service announcements that seem to work for the general public, may not be effective on the reservation. In addition, it should be kept in mind that there is no generic Indian culture, but rather hundreds of distinct Indian cultures. What works on one reservation may not work on others.

A Very Short Overview of the O’odham Indians