Marriage is an almost universal human institution. However, the concept of marriage varies greatly among different cultures. In some cultures, marriage is seen as a primarily economic institution; in some it is celebrated with a religious ceremony; some marriages are arranged by elders who take into account the needs of the society and the extended family. 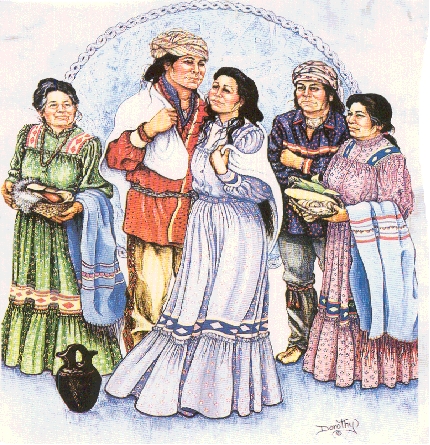 The Southern Plains lie south of the Arkansas River valley. It includes Oklahoma, Arkansas, portions of Texas, the eastern foothills of New Mexico, and portions of Louisiana. This area included hunting and gathering tribes, such as the Comanche, the Kiowa, the Osage, and the Lipan Apache, and more agricultural tribes such as the Caddo.

As with tribes in other North American culture areas, there was no formal marriage ceremony among many of the Southern Plains tribes. In general marriage was seen as a social and economic institution rather than a religious institution. In some cases, the couple would simply live together and be recognized by others as a married couple. Among many of the tribes, such as the Plains Apache, marriage could be legitimized by the exchange of gifts between the two families.

While the Europeans tended to emphasize the sexual aspect of marriage, for the Indian nations of the Southern Plains there was no special concern regarding sex and marriage. There were no premarital restrictions on sexual intercourse.

Polygyny (the marriage of one man to several women) was common among many of the Southern Plains tribes. As a normal pattern, the second wife would be the sister of the first wife (a practice known as sororal polygyny). In general, there were two advantages to this form of polygyny. First, it was generally acknowledged that sisters don’t often fight and thus marriage to sisters helped reduce tension in the household. Second, marriage was an economic relationship and this meant that the husband would have economic obligations to only one other family.

The ideal Osage marriage was arranged by the families and it was considered preferable if the couple did not know each other prior to marriage. Individuals were not allowed to marry someone who belonged to one of their four grandparents’ clans. The marriage ceremony included an exchange of gifts between the two families. Polygyny tended to be sororal as the husband of the oldest daughter had marriage claims on the younger sisters.

Among most American Indian cultures, all adults were married. This meant that there needed to be mechanisms in place for re-marriage when a spouse died. Some of the tribes, such as the Lipan Apache, the Plains Apache, the Comanche, and the Kiowa, practiced the sororate. That is, if a man’s wife died, her family would provide him with one of her sisters as a wife. The “sister” could be a “cousin” as recognized by the European way of describing relatives.

Many of the tribes also practiced the levirate. When a man died, his widow would be married to his brother. Keep in mind, that in the kinship terminology of many of the tribes, some cousins would be considered the same as brothers. With this arrangement, the brother would assume the economic responsibilities of the widow and her children.

For non-Indians perhaps the most baffling form of Native American marriage was polyandry: the marriage of one woman to more than one man at the same time. This most often took the form of a man lending his wife to his brother. Among some groups, such as the Comanche, this was an anticipatory levirate. When a man died his wife would become the wife of his brother. Anticipating this practice, a man would allow his brother(s) to have sexual access to his wife. This was seen as symbolic of the brotherhood bond.

A Brief Overview of the Assiniboine Indians