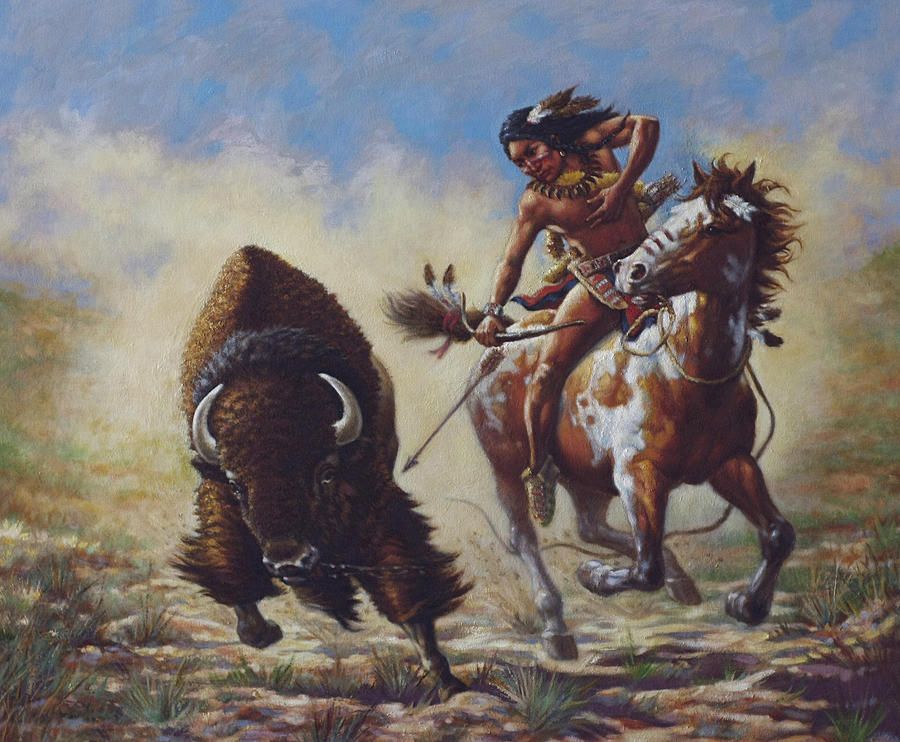 For thousands of years, the Indian nations of the Northern Plains relied upon the buffalo—technically bison, but commonly called buffalo—for food, for clothing, for shelter, and for tools. Before the coming of the horse, buffalo were hunted using either a buffalo jump or a corral.

The corral or impound method involved building a timber corral and enticing the buffalo into it so that they could be killed. Archaeologist Arrow Coyote, in his master’s thesis of the University of Montana reports:

“The corral structure can be made of fences of logs, brush, or piled snow. The idea is to construct the pound carefully to look solid so that bison cannot see ‘daylight’ and try to burst through the fences.”

“A pound had to be built under the supervision of a shaman who had been given the power to do so by a spirit helper. Each pound could only be used through one winter; the following year a new one had to be built.”

To make the impound, a thicket was first selected and an area 30-40 feet in diameter was cleared. A wall about 10-15 feet high was then constructed around the clearing. The entrance to the impound was placed to the east and two sturdy trees located about 20 feet apart were used as the entrance gates. A log was then lashed between the two trees at the height of the wall and a ramp constructed from the ground to this log.

At an oblique angle to the entrance of the impound, a chute was built to guide the buffalo. The chute was about 100 yards out and made a sharp turn right before the entrance. With the sharp turn, the buffalo herd would not see the corral until it was too late to stop.

To bring the buffalo into the chute leading to the impound, the hunters would locate a herd and then begin driving it toward the chute by slapping their folded robes against the ground or the snow. The herd would move away from the noise and then settle down to graze again. The men would repeat the action, moving the herd toward the chute. When the herd got close to the entrance of the chute, a single horseman, using a fast horse, would ride out and guide the herd into the chute.

Once inside the impound, the buffalo would mill about in a clockwise fashion and would be shot with arrows. Before butchering the dead animals, the medicine man would sing a song to the spirits. The camp crier would apportion the buffalo, usually giving the fattest carcasses to the men who had helped build the corral. Anthropologist David Mandelbaum writes:

“All who were encamped in the vicinity of a pound were privileged to share in its yield, regardless of whether they had helped build it or whether they belonged to the band that had constructed it.”

The buffalo jump involved luring the buffalo over high precipices along river valleys. To lure the herd to the jump site, a young man, disguised with buffalo horns and robe, would decoy the herd. Grace Flandreau, in her book The Lewis and Clark Expedition, writes:

“The job of decoy, given to the bravest and fleetest of the young men, seems to have been a questionable privilege, his escape from destruction depending entirely on whether he could run faster than the buffalo, and find a foothold under the cliff.”

The animals were usually killed or disabled in the fall. Crow warrior White-Man-Runs-Him describes the buffalo jump this way:

“When we got the buffalo up near the edge of the precipice we would all wave our blankets and buffalo robes and frighten the buffalo and they would run off the steep place, falling into the valley below, one on top of another.”

Buffalo were often hunted in the winter as the large animals could not run fast in the snow. The hunters, wearing snowshoes, could easily approach them at this time. To carry the meat back to camp, sleds were often made from buffalo ribs and hickory saplings.