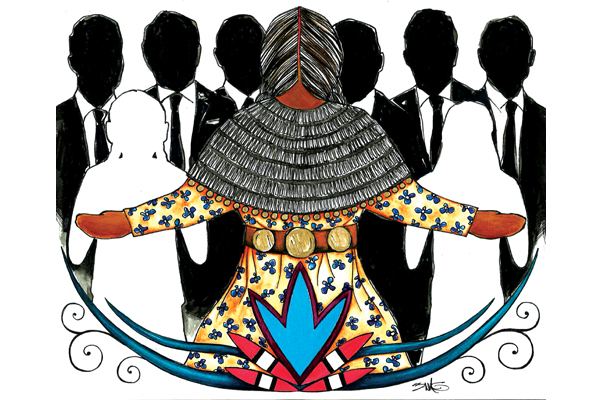 We don’t really know how many Native American languages were spoken in what is the United States and Canada when the Europeans began their invasion. Linguists Shirley Silver and Wick Miller, in their book American Indian Languages: Cultural and Social Contexts, estimate that there were 250 American Indian languages in this area. On the other hand, Ives Goddard, in an article in the journal AnthroNotes, estimates that there were as many as 400 distinct languages.

For much of its history, the policies of the United States have discouraged the speaking of Indian languages and, in some contexts such as that of the schools, has prohibited their use. As a result, there have been fewer places where the indigenous languages can be freely spoken. Ellen Lutz, the executive director of Cultural Survival Quarterly, writes:

“Native Americans did not lose their languages. Their languages were taken from them by immigrants to American shores who believed in assimilation, the melting pot, and the great American dream.”

Ethnolinguist Jeffrey Anderson, in an article in Anthropological Linguistics, sums it up this way:

“In short, people speak the language in fewer and fewer places.”

For many Indian languages, the primary place where they are used can be considered as ceremonial.

At the present time, it estimated that there are 46 Indian languages which are still being spoken by significant numbers of children. Languages which are being learned by children have some chance of survival.

Retention of the native language is an important issue for many tribes. Linguist Ives Goddard writes:

“Today, many Native American communities have language programs to try to teach their languages to children.”

As a consequence, there are on many reservations programs which are intended to maintain the language. In communities in which the children no longer speak the native language, the goal is language revival in which the Indian language is taught as a second language. By 1986 there were 98 language projects involving 55 different Indian languages. There was an enrollment of more than 14,000 students in these programs. By 2006, there were 62 native languages being taught in 101 programs in 24 states and provinces.

Denise Juneau, who is running of Montana’s sole member of the House of Representatives, says:

Denise Juneau is an enrolled member of the Mandan Hidatsa tribes and a Blackfoot descendent. Denise Juneau was elected Superintendent of Public Instruction in 2008 and re-elected in 2012. She reports:

As a member of Congress, I will educate my colleagues on the importance of tribal language programs. And, I will work to create new grant opportunities for tribes to create or expand language immersion programs.

Why should we care about Native languages? Mark Cherrington, the editor of Cultural Survival Quarterly, puts it this way:

“But for all its breadth, English cannot substitute for Native American languages, because these languages are based on entirely different histories, spiritual beliefs, scientific and natural-world understandings, and political and legal ideas. In essence they are based on different realities. Native languages capture concepts that do not exist in English.”

Journalist Elizabeth Seay, in her book Searching for Lost City: On the Trail of America’s Native Languages, puts it this way:

“When people have no language to bridge the gap between generations, they diminish their ability to decode their history. When you lose a language, then, the size of the loss is somewhere between a list of bird names and a conception of the world.”

It is important to elect Denise Juneau and others like her to Congress. For more about Denise, check out her website.