A new religious movement began in England in the late 1640s. The Religious Society of Friends, commonly known as Quakers, felt that it was possible for individuals to have a direct experience of Jesus Christ without the mediation of clergy. In addition, they believed in the spiritual equality of women. These two things made it easier for Native Americans, with a shamanistic and egalitarian background, to accept the Quakers among them as missionaries. 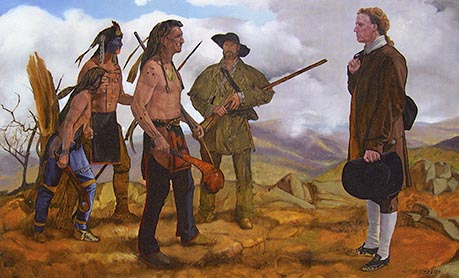 In 1681, King Charles II of England granted a land charter to William Penn. The friendly relations between the Quakers and American Indians began when William Penn signed a peace treaty with Tammany, the leader of the Lenni Lenape (Delaware) nation.

In 1755, the Quakers established the Friendly Association for Regaining and Preserving Peace with the Indians by Pacific Measures. In establishing this charity, the Quakers hoped to return to the Indian-European relations that had been established by  William Penn. Unlike other European charities at this time, the new Quaker charity spent its funds on Indians. This caused many non-Quaker Europeans to resent the association. The new charity was intended to be as conspicuous as possible-to both Indians and Europeans-and therefore serve as a shining example of how intercultural relations could be conducted.

In 1760, the Munsee prophet Papounhan and 30 of his followers visited Philadelphia and asked to see the Friends (Quakers) about religion. Unlike other Christian groups, the Quakers did not condemn Indian religions. While in the city, the Indians regularly attended meetings for worship in the Quakers’ Greater Meetinghouse.

In 1765, Quaker missionary John Woolman preached to the Munsee and Delaware. He felt that the Delaware were already communing with the divine light inside them and he sought spiritual tutelage from the Indians. He wrote:

“in mine own eyes I appeared inferior to many amongst the Indians.”

In 1795, the Quakers appointed a committee for the civilization and welfare of Indians. The plan was to introduce among the Indians what the Europeans felt were the necessary arts of civilization, including animal husbandry and the mechanical arts. The following year, the Quakers began their Indian plan by sending tools to most of the Indian nations of the eastern United States.

Following their Indian plan, five Quakers arrived at the Seneca town of Jenuchshadago in 1795. The Seneca, under the leadership of Cornplanter, were hungry because floods and frost had damaged their corn harvest. After consideration of the Quaker request to live among them and teach them, Cornplanter told them:

Unlike other Christian missionaries, the Society of Friends was willing to accept the theological validity of Indian religious experiences.  The Quakers concentrated on teaching some of the young people how to read and write in English and to teach men and women modern farming techniques. They incorporated moral advice into their practical instruction. In this way, the Quakers attempted to persuade the Seneca to be sober, clean, punctual, industrious: in other words, to take up the Protestant ethic without, necessarily, becoming Protestants.

In 1808, the Quaker missionary William Kirk supervised the Ohio Shawnee as they cleared 400 acres and planted new crops such as potatoes, cabbage, and turnips. The Shawnee purchased breeding stock hoping that hogs and cattle would eventually supply them with the meat they used to get through hunting.

While Kirk was successful in teaching the Shawnee the European methods of farming, he was lax with his paperwork. Having failed to file financial statements with Washington, his mission was terminated by the government. When Kirk left, the Shawnee lost their primary source of technical advice and their experiment in agriculture waned.

In 1827, Seneca leader Red Jacket traveled to New York City to talk with the Quakers about providing aid for his people. Red Jacket trusted few persons other than the Quakers, who could not be intimidated and who were quick to expose a fraud. However, the Quakers were involved with helping the Onondaga and did not have any resources with which they could respond to the Seneca request. Two years later, Red Jacket repeated his request and this time the Quakers provided the Seneca with both farm equipment and sound advice.

The heyday of Quaker involvement with Indians came with President Ulysses Grant’s 1869 Peace Policy in which the federal government turned over the administration of Indian reservation to Christian missionary groups.

In Oklahoma, the Comanche and Kiowa were assigned to the Quakers and the army was removed from the reservation.

In Nebraska, the six reservations were placed in the care of the Hicksite Quakers, the liberal branch of the Society of Friends. A part of the Quaker plan to destroy the political and social structure of the Pawnee was the elimination of the Pawnee scouts, a group which had a long history of serving the United States army. As pacifists, the Quaker brotherhood made no allowance for the Pawnee culture, traditions, or experiences in which war experiences were glorified. Ignoring the reality of drought and grasshoppers, the Quakers saw farming as the way to convert the Pawnee.

The first Quaker Indian agent for the Big Blue Reservation (Otoe-Missouria) in Nebraska and Kansas, found 450 Otoe living in a 25-acre village which contained 30 earthlodges. The Otoe continued to use their traditional agricultural practices and to do some hunting. While the Quaker agents came with good intentions, they failed to understand the organization of the tribe. Therefore they disrupted the traditional leadership pattern, and contributed to tribal factionalism.

In Nebraska, the Quakers assumed control of the Omaha reservation. The tribal chiefs asked that the funds for the Presbyterian boarding school be withdrawn and that two day schools be established. The Quakers treated the Indians as spiritual equals but cultural inferiors who must learn European ways or perish. They stressed allotment of tribal lands and the creation of individual farms.

Overall, the Quaker experiences with the Indians during the 18th and 19th centuries were good with regard to religious tolerance. Many of the Indians, particularly those in the east, found it easy to incorporate Quaker spiritual concepts into their own religion. The Longhouse Religion, founded by Seneca religious leader Handsome Lake, for example, seems to have incorporated a number of Quaker teachings. On the other, the emphasis on war honors among the Plains tribes created some problems for the pacifistic Quakers.

During the 19th century, the Quakers were hampered by an ethnocentrism which saw the Euro-American way of life as superior to the Indian way of life. While Indian religious practices were tolerated, there was an emphasis on changing other aspects of Indian culture, including government and family.